Give Him Your Burdens 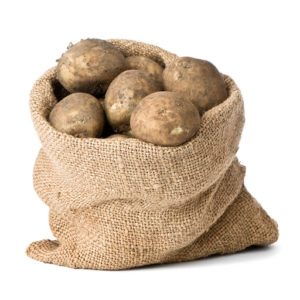 As for me, I call to God,
and the Lord saves me.
Evening, morning and noon
I cry out in distress,
and he hears my voice.
He rescues me unharmed
from the battle waged against me,
even though many oppose me.
God, who is enthroned from of old,
who does not change—

Cast your cares on the Lord
and he will sustain you;
he will never let
the righteous be shaken. (Psalm 55)

A poor man in Ireland was plodding along toward home, carrying a huge sack of potatoes.  A horse and wagon finally came alongside of him on the road, and the driver invited the man a ride.  After getting on the wagon, the poor man sat down but continued to hold the heavy bag of potatoes.

When the driver suggested for the man to set the bag down in the wagon, he replied, “I don’t want to trouble you too much sir, you are giving me a ride already, so I’ll just carry the potatoes.”

“How foolish of him!” we say.  Yet sometimes we do the same thing when we attempt to bear the burdens of our lives in our own strength.  No wonder we become weary and overwhelmed with anxiety and fear.

In Psalm 55, David spoke of the anxiety he felt because his enemies were attacking him (vs. 1-15).  But then he gave his concerns to the Lord and was filled with renewed hope and confidence (vv.16-23).  That’s why he could write, “Cast your cares on the Lord, and he will sustain you” (v.22).

When you recall the story the story of the man with the bag of potatoes, remember the simple story it illustrates: Rather than trying to carry your own burdens by yourself, set them down in the hands of God.  –H. Bosch