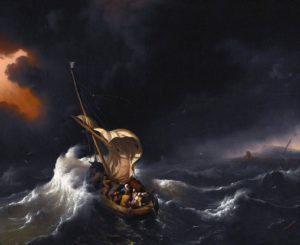 36 Leaving the crowd behind, they took him along, just as he was, in the boat. There were also other boats with him. 37 A furious squall came up, and the waves broke over the boat, so that it was nearly swamped. 38 Jesus was in the stern, sleeping on a cushion. The disciples woke him and said to him, “Teacher, don’t you care if we drown?”  39 He got up, rebuked the wind and said to the waves, “Quiet! Be still!” Then the wind died down and it was completely calm.  40 He said to his disciples, “Why are you so afraid? Do you still have no faith?”

How ironic was the disciples’ question? It is incredible that He whose every act was a link in the chain of redemption should be accused of indifference by His followers, of not caring by His disciples.  With mingled agitation and reproach the woke Jesus and questioned His concern for them.  They suspected Him of carelessness!

In His gently rebuke, Jesus pinpointed their real predicament.  It was not, as they supposed, the actual danger of the storm but lack of faith.  Yet He proved His caring by His actions.  He rebuked the winds.  He calmed the waves.  He stilled the waters that frightened the disciples and Jesus demonstrated direct and personal care for them.